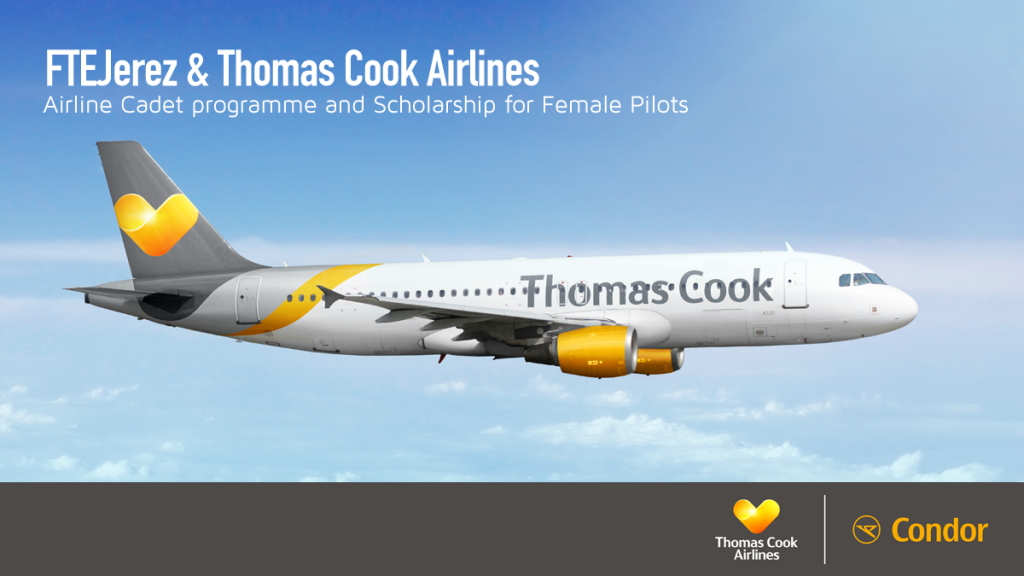 Thomas Cook Airlines launches a new Airline Cadet Programme with FTEJerez and announces a Scholarship inspired by Raymonde de Laroche, in what is a joint initiative to attract female pilots to the profession.

After not having trained ab initio pilots for a number of years, Thomas Cook Airlines is launching a Mentored Airline Pilot Programme with their long-standing training partner, FTEJerez. Selected candidates will commence their training at FTE’s aviation campus in August 2018 and transition to an Airbus type rating and first officer role with the airline on successful completion of their Airline Transport Pilot Licence (ATPL) course in Spain.

FTEJerez is also proud to announce that the academy will co-sponsor the Thomas Cook Airlines / FTEJerez Scholarship for Female Pilots, inspired by Raymonde de Laroche. The scholarship is open for female applicants to be trained at FTEJerez as part of the Thomas Cook Airlines Mentored Cadet Pilot Training Programme. The initial plan is to, over the next five years, annually award one scholarship of 30,000€ (thirty thousand Euros) to a successful applicant to be applied towards her training costs at FTEJerez.

Following the announcement, FTEJerez CEO, Oscar Sordo, commented as follows: “We share the airline’s goal of attracting more female pilots to the profession and we are therefore honoured to be associated with the Thomas Cook Airlines initiative by part-sponsoring this Scholarship.”

“We are very proud of Thomas Cook Airlines’ decision to again entrust FTEJerez with the training of the airline’s next generation of first officers and future commanders. We also view it as fitting recognition by the airline of the high quality training provided by FTEJerez.”

Paul Hutchings, UK Managing Director and Group Airline Director of Operations at Thomas Cook Airlines said: “As we celebrate International Women’s Day, there was no better time to raise awareness of the many opportunities to build a career and encourage more young girls and women into the aviation industry; this Scholarship is further proof of our commitment to highlight that our industry is for men and women.”

The Thomas Cook Mentored Cadet Pilot Training Programme will be opening for application on 16th March 2018. Further details will be announced on the FTEJerez website, here.